The “plan.” Create a tunable dipole for 20-6 meters… maybe even get 40 meters added later. 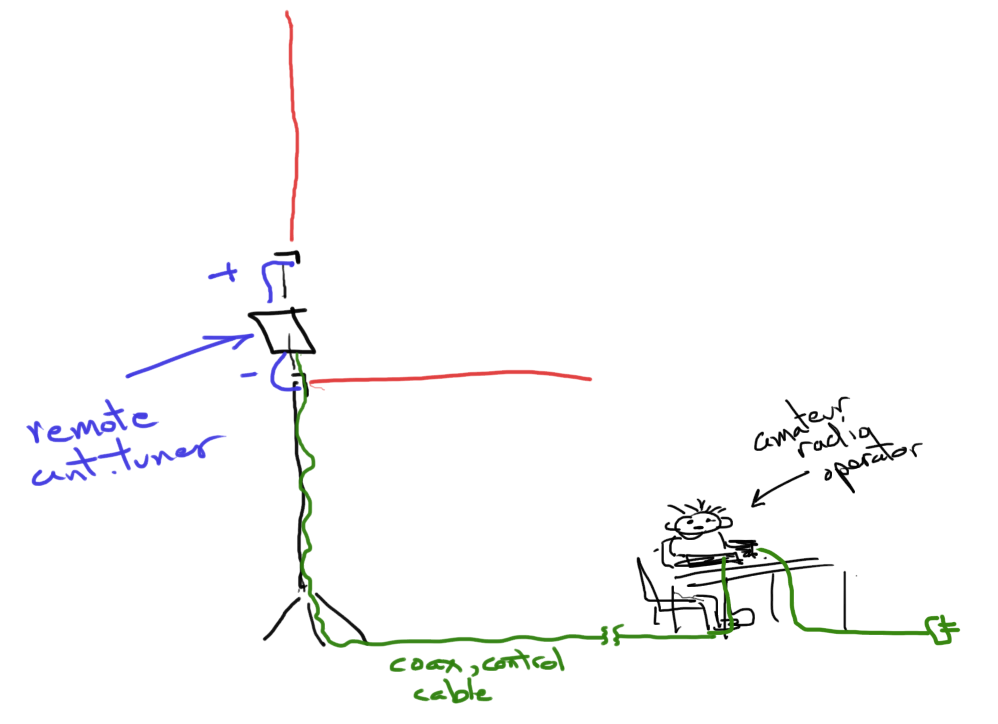 There are at least five or six different brands of remote antenna tuners ranging from SGC, Icom, Alinco, LDG, MFJ… the main idea is to tune the system at the feed point to a low SWR to reduce losses in the coax. That… and I have 4 autotuners laying around, so... 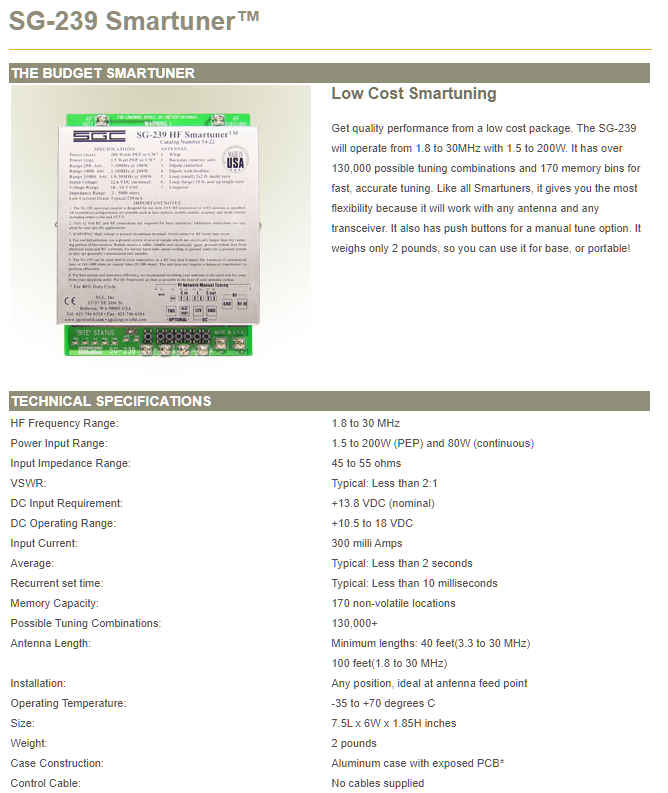 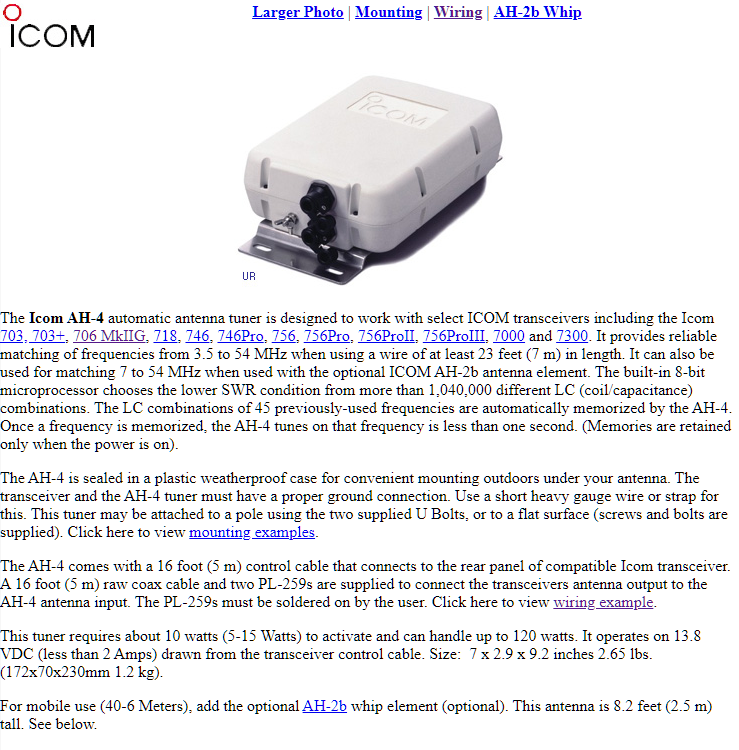 SGC has many different remote tuners or “matchers.” Most radio companies have them, too.

The losses (per 100 ft) given for coax are always calculated with an assumed 50 Ohm load. If you deviate from that the losses can go sky-high with poor SWR… even at HF… even with good coax. So “why fight city hall” when you can just match the antenna at the feed point and be done with it? (At least that’s my thought process.) Besides, remote tuners like the AH-4, etc, are very versatile and can be used for many other antenna applications.

I thought I would start off with an “L” configuration and later move it to a “V” configuration… mostly to reduce turning radius. While the “L” is the smallest turning radius I can get presently, the pattern is really more omnidirectional than a “T” or “V” dipole (according to the literature I can find online concerning the matter.) I plan on fabricating a “V” dipole mount later so that each radiating element is 45 degrees up from the Horizontal (and 90 degrees from one another) - not counting sag (102” whips do tend to sag a bit.) The end goal is to use two 20 meter elements (EMT, fiberglass or bamboo with a 16.5’ wire element loosely wound??) and tune 20 thru 6 meters… instead of taking two 10 meter elements and tuning 20-6 meters. “It’s easier to tune a long antenna short than it is to tune a short antenna long” is the old saying, and I plan on following it.


Here is what I managed to put together in a few hours this weekend. 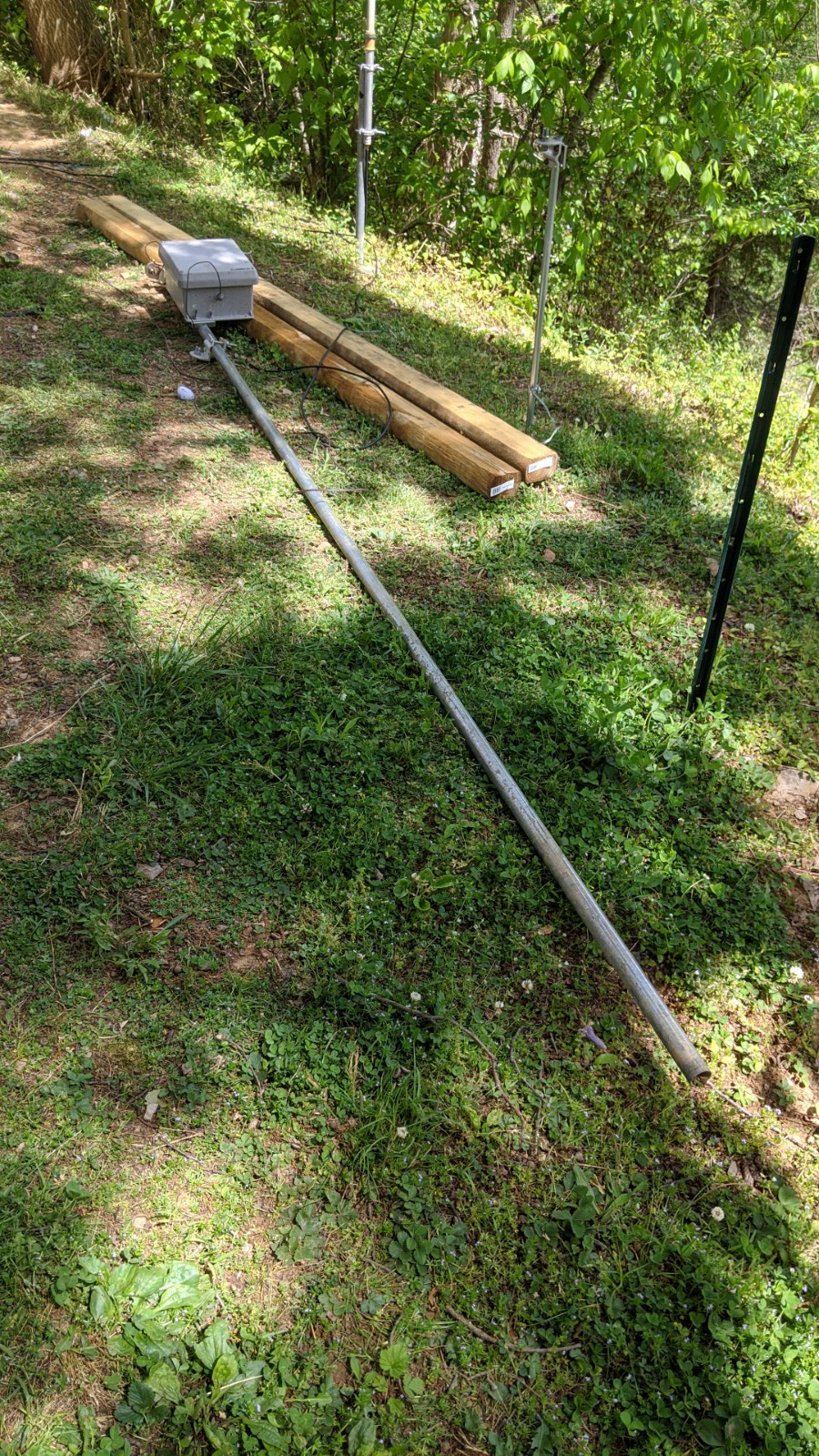 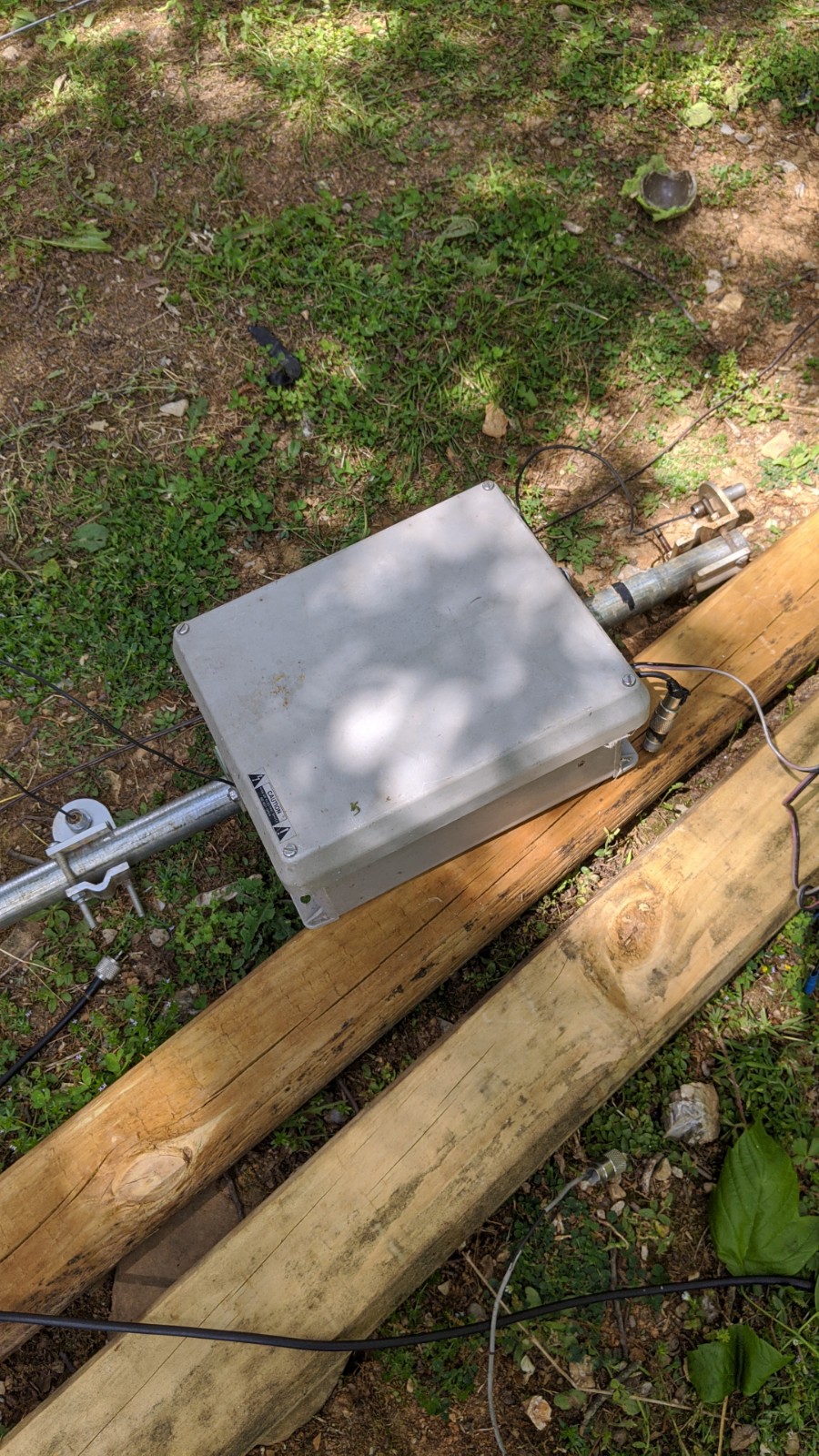 The SGC 239 tuner is mounted in a water-tight NEMA box with the needed leads brought out and water sealed. Note the 8’ fencing post (Home Depot) I’ve mounted it on using two U bolts (the box has mounting flanges on the back) and two “Hamstick” mounts from a local Pilot truckstop. (The bolts diagonal from one another on the ⅜ antenna mounts were removed to make it fit on the main part of the pipe - it will fit correctly on the tapered end, however. ) 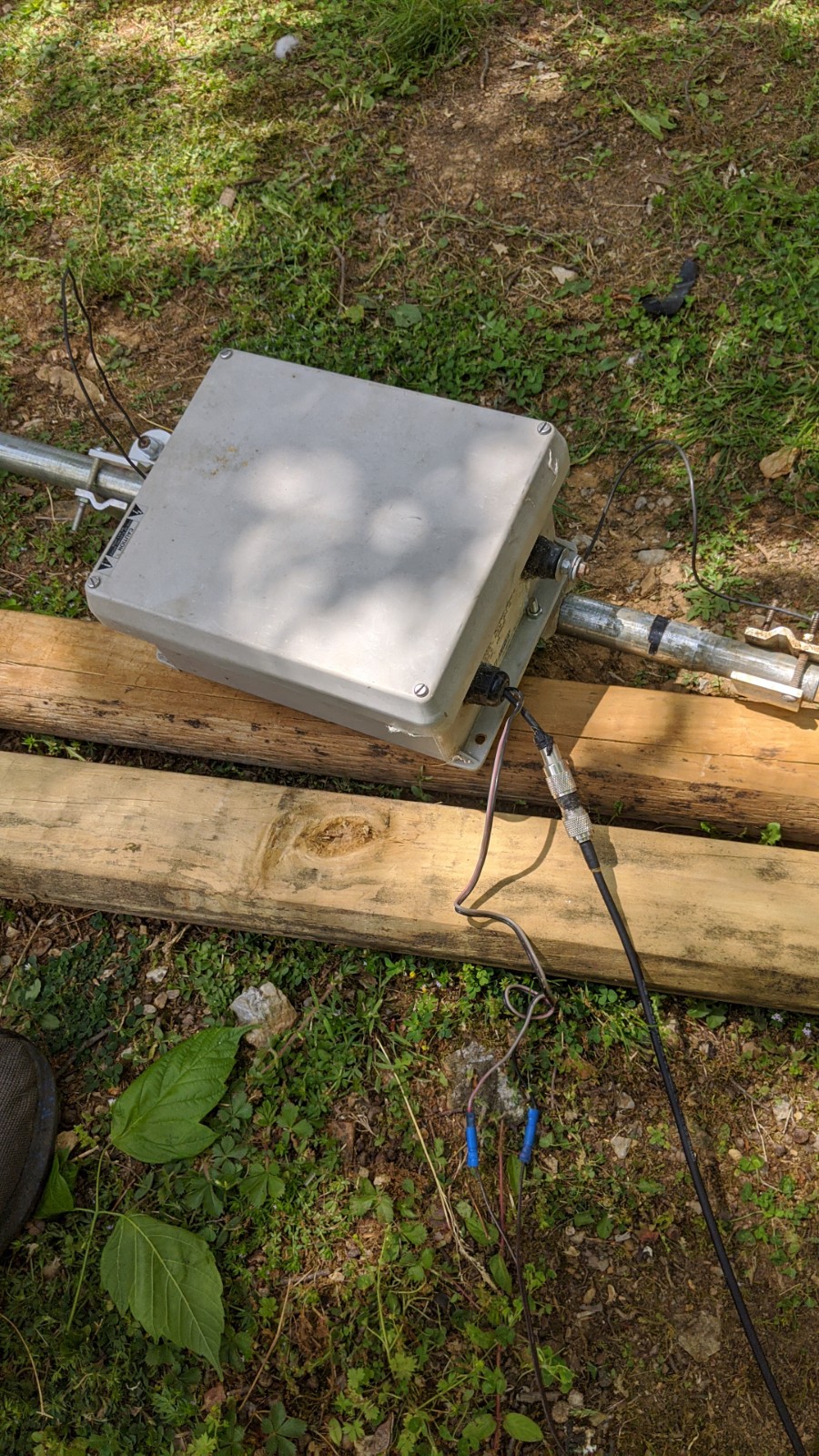 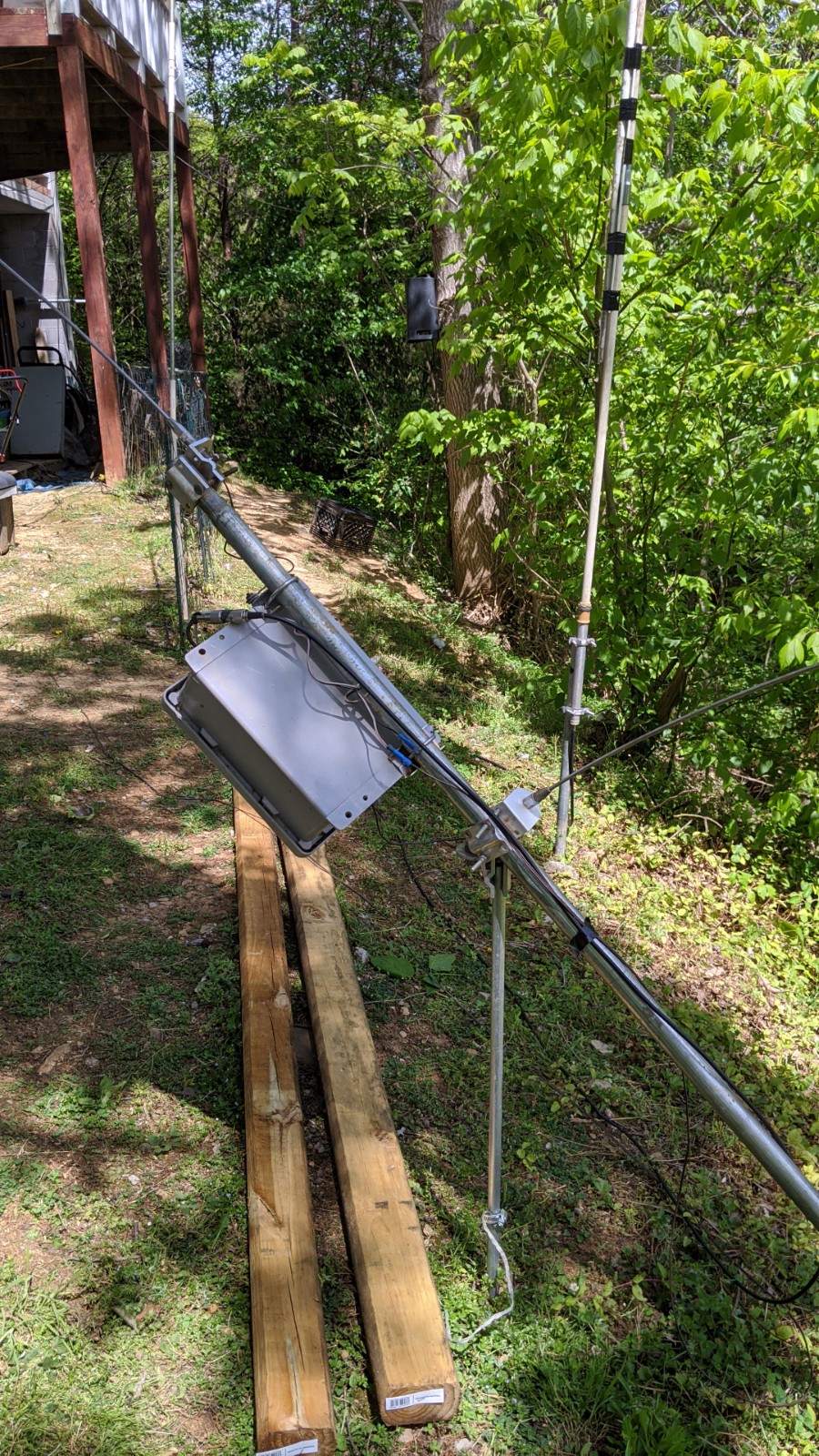 These two pictures show the various mounts from more angles. )Note the Marconi “hamstick” mount being used to hold it up in the picture on the right. And the Antron 99 ground mounted behind it. )

The assembly could be mounted many ways… I am going to slip the 8’ pole over the garden fence “post” as a temporary mount. 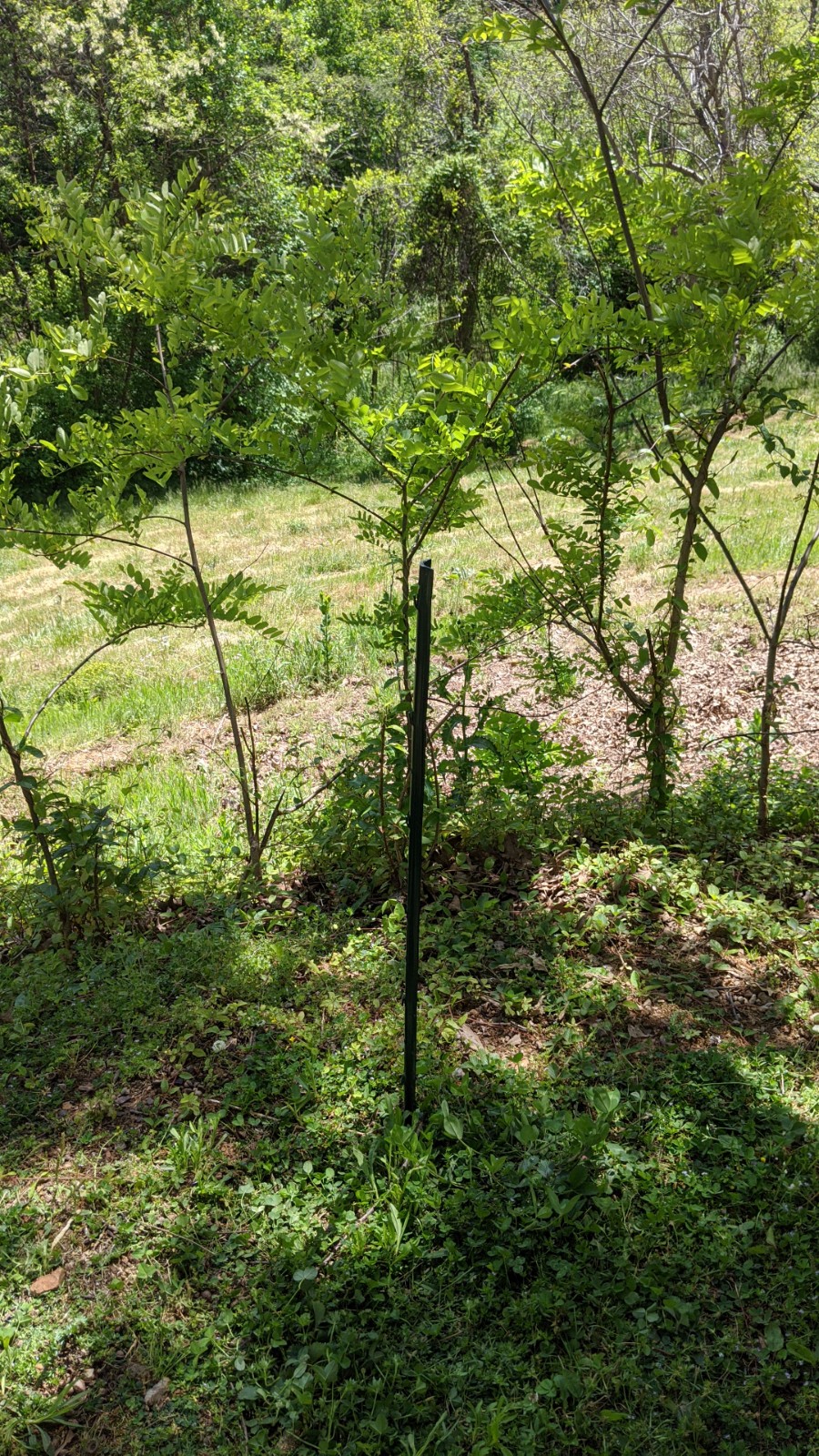 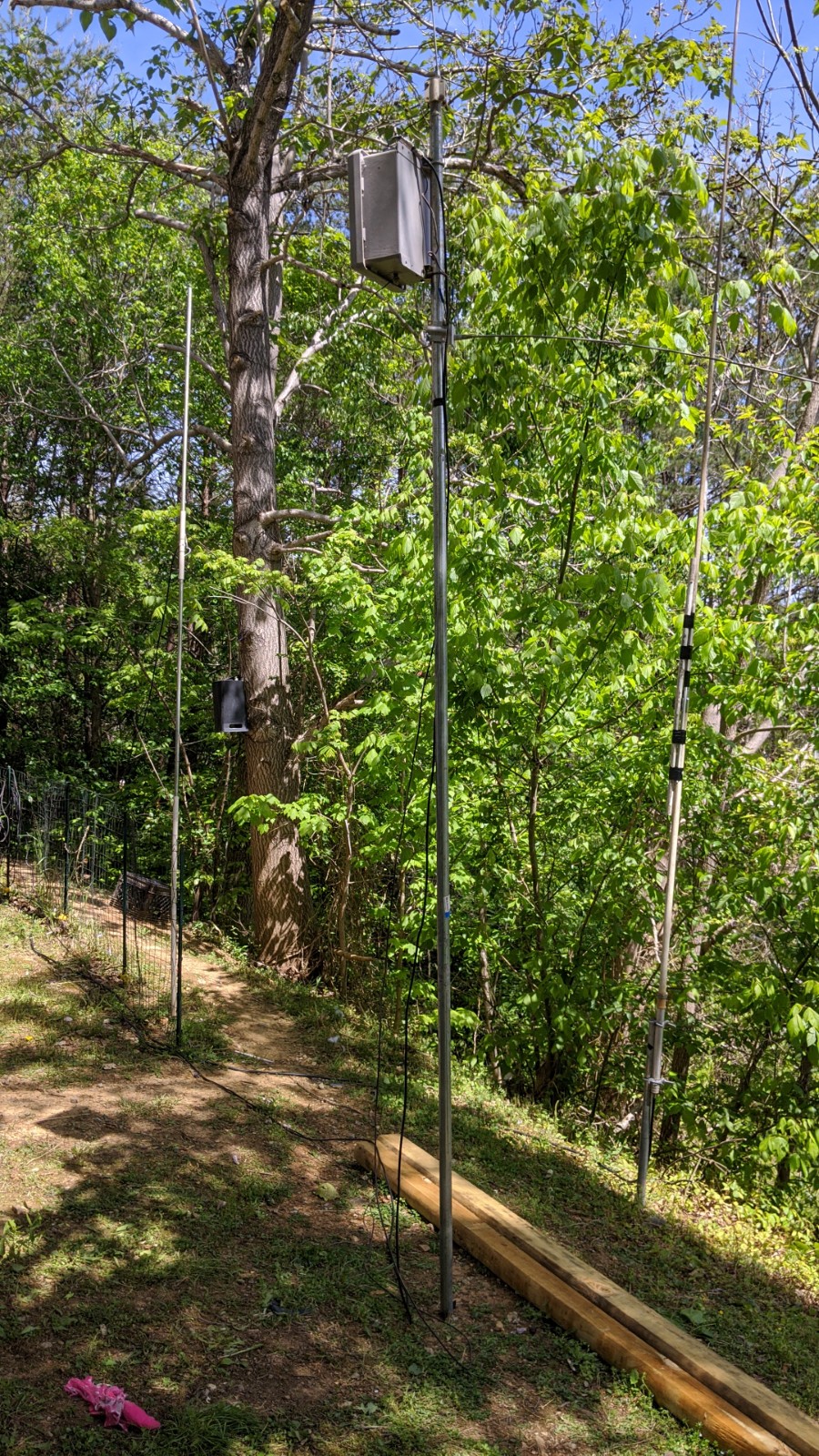 (Note the 6 meter vertical dipole in the picture on the right. It is temp mounted to the garden fence while the Antron 99 is again in the background.) 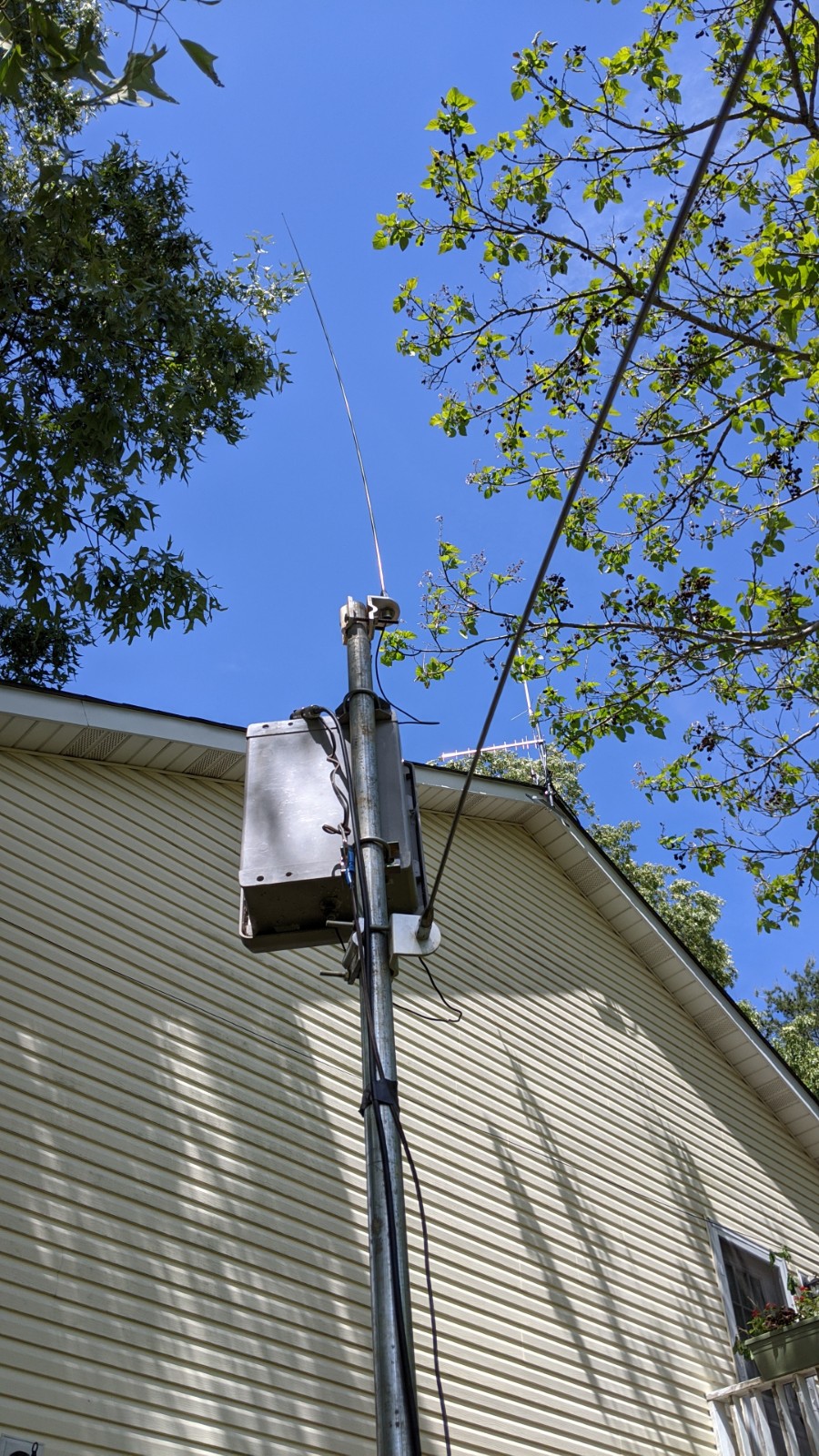 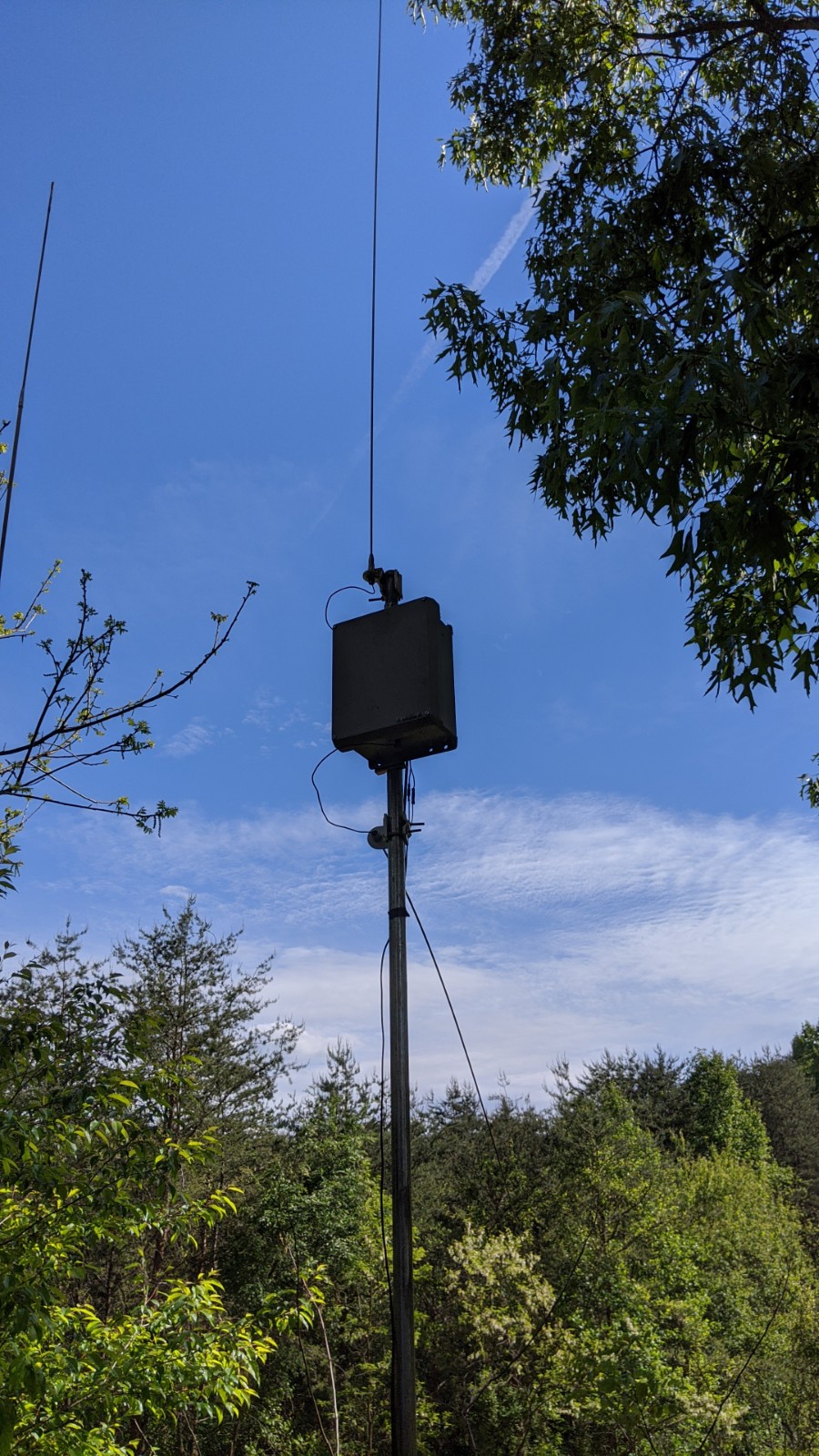 I will be experimenting with it in the current configuration on days the HF bands are more agreeable and hope to fabricate a “V” top mount in the days ahead. Given a taller pole mount, one or more “hamstick dipole mounts could be added below the tunable assembly. 40 meters is the likely candidate but 80 merters could be as well. (At least 1 more cable would be needed for this depending on how the dipole mounts are wired. A desktop tuner such as an LDG AT-100 Pro would be desirable - if working an entire band is needed.) Results with the “L” have been decent given the condition of the bands. On 20 meters it was only 1-2 S units down on the 160 meter loop. On 17 meters it had a better signal to noise ratio on my receive but the loop was more easily heard by the remote station. I have not heard anyone on 15, 12, or 10 meters to test it with so far. 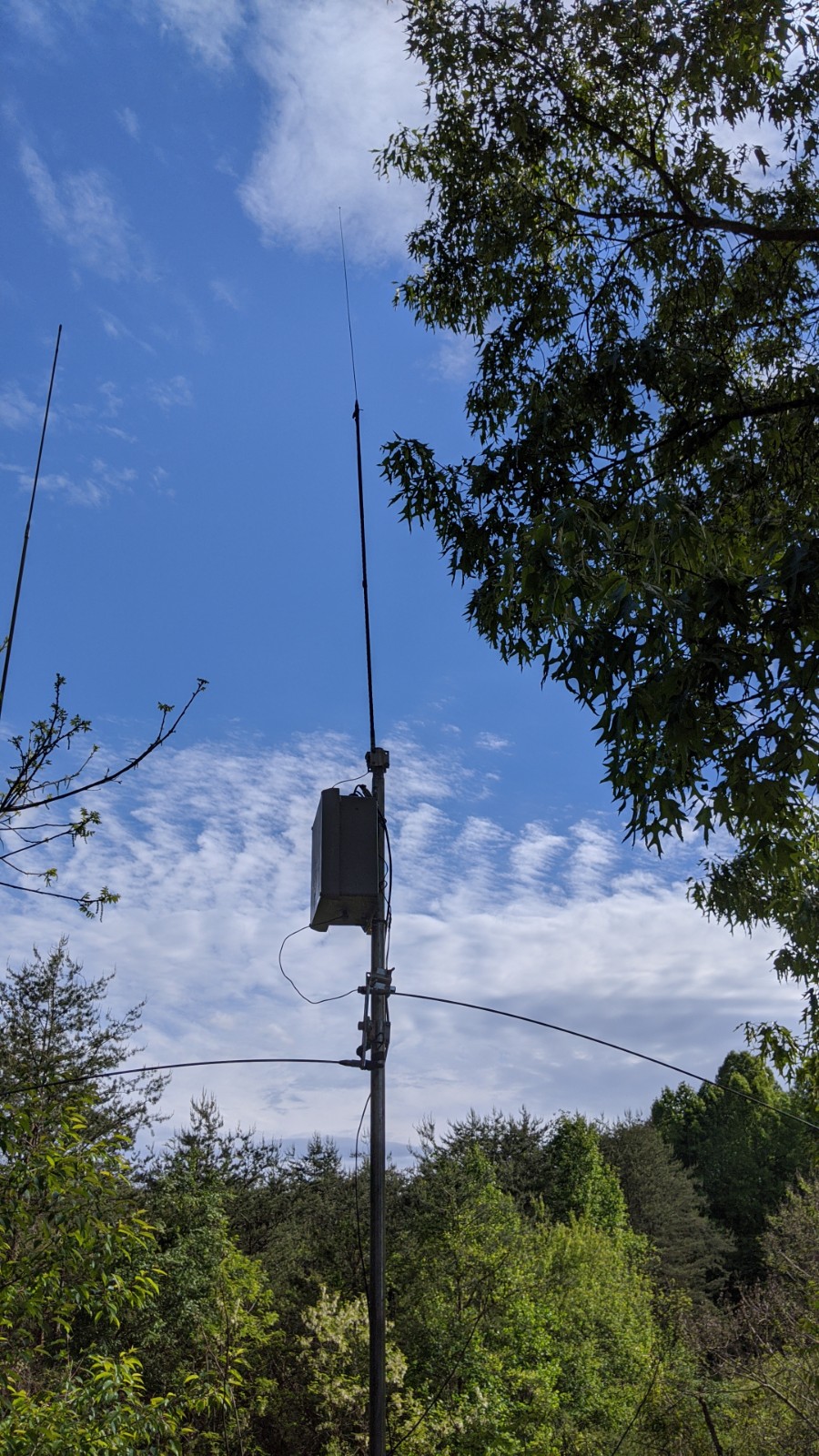 This pic shows a hamstick dipole mount below the tunable assembly. However, I had the dipole mount shorted and was using the two 102” whips as a counterpoise to the 40 meter vertical hamstick above (The SGC 239 was still in line and doing it’s thing.)

Results haven’t been too bad so far for the 40 meter only vertical… 2-4 S units down on a 160 meter horizontal loop with crappy band conditions.


The last picture does show you that a dipole (or two) could easily be mounted below the tunable 20-6 meter section. As a field day set up I would use a rotatable guy system and use at least one more 8’ pole beneath the one used in the assembly. I am in fact planning on cutting the pole below the dipole mount so I don’t have to account for 5-6 feet of pole hanging off the end of the section with all the mounts, etc.


When used, I would take the section with the mounts and place it on the tapered end of an 8’ pole… and then probably hoist that up onto a second 8’ pole to get the base of the “L” or hopefully soon to be “V” antenna up to around 20 feet above ground. An improvised guy system (Armstrong Rotor, naturally) that allows the entire assembly to be turned at least 90 degrees.

I got frustrated with it a few times but had to realize what I was comparing it to - a 160 Loop tuned to 20 meters is a pretty damned good omni-ish antenna… while I’m using 2 ¼ wave 10 meter elements for 20. But it does play and I’m going to set it up in front of the school during the summer a few times to see if I get any drive-by interest.


UPDATE:  Even mounted 8' above the ground, this system has worked pretty well on the upper bands... - down 2 to 4 S Units from the loop on 20 but not bad for a tuned 10 meter dipole.  I'm encouraged enough to think the system would work much better with two 16.5' elements instead of the two 102" inch elements I just used because they were available.  I will have to fabricate a mount but I think I can use PCV as an insulator and use two pieces of emt conduit with the 102" whips mounted to the ends for the dipole.  The autotuner will remain mounted below.  The shape will move from an "L" to a "V" dipole.
UPDATE for the UPDATE:
I "ran it up the flagpole" so to speak and found that it pretty much had similar performance to my 33ft elevated vertical antenna.  I was NOT using a rotor with it so I'm sure that effected the results to some degree.  Anyway, I plan on using it for field day and using the AH$ tuner at the antenna feed point instead of tuning it remotely (which I did when I had it mounted on the eave of the house.
Below are the pics of the construction, etc. 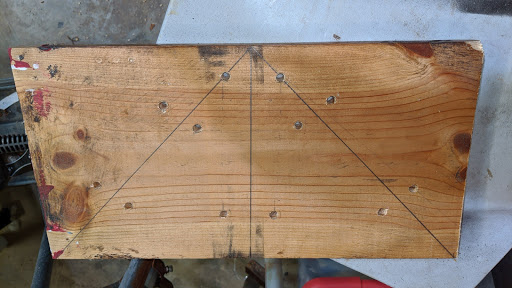 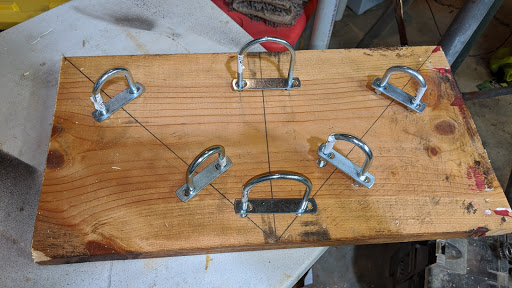 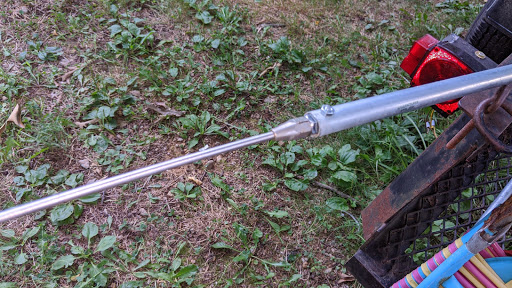 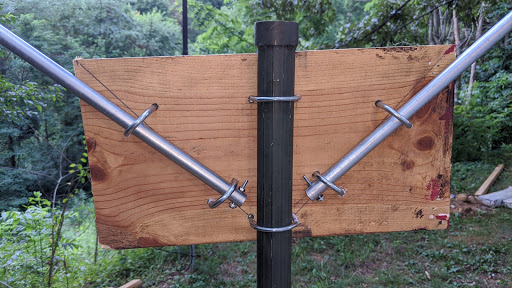 Painted and mounted it is not very obtrusive for it's size. 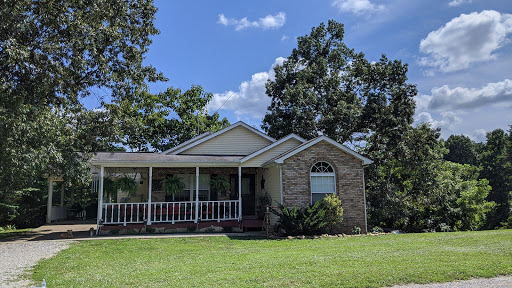 Posted by Stephen T. Smith at 3:22 PM No comments: